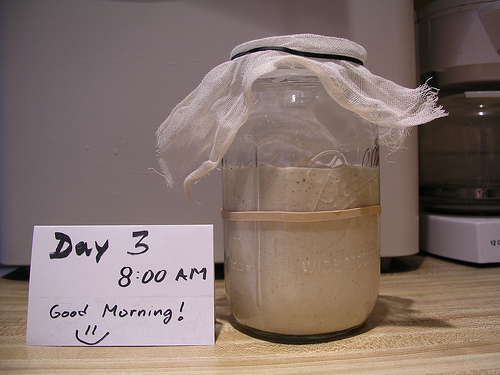 The 3rd day looked like thing were moving in the right direction. The sourdough starter grew about 1 inch over the indicator line (rubber band). Not as aggressive as during the day before, but given the fact that our night temperature is set to 65 (to save energy), I thought this was okay.
I went on to prepare the sourdough starter breakfast – the usual 1 cup flour , unbleached, all-purpose, and realized that I ran out of bottled water (used ¾ cup of tap water instead). Mixed that with the leftover (1 cup) and took off to church. Arriving back from church at around noon, we discovered that our heater’s thermostat had a hiccup and decided that it won’t work, so the house had a “comfortable” 58 degrees F. The thing just needed a slap and started working again.
But curiously, there was no activity in the sourdough starter except some vague surface bubbling. I thought it might be a result of the low temperature, and that it will recover later on in the afternoon.

Unfortunately during the afternoon, there wasn’t any growth at all except the surface bubbling and (ironically) a good sourdough smell. I decided to give it one more night feed and see what happens after.
I did so, but next day again, no growth except the bubbling. Not good, I’m thinking. Or maybe I have wrong ideas, by expecting growth each day?
Steph said that it really smells how it supposed to, and had the idea of actually proof-testing by making a quick loaf in our bread machine. There was barely (if any) rise in the bread, so that made me conclude that this batch will go nowhere, so I discarded it. Please let me know if I made a mistake!

My very first though was that I killed (was it really dead or just going into hibernation?) the yeast by using tap water to feed it. Tap water contains all sorts of chemicals that are not necessarily harmful, but they don’t make the yeast happy either. But possibly our particular tap water has some chemicals that might have killed the kind of yeast we have floating in Chicago.

Then I thought that the low temperature was the culprit. But that really didn’t make any sense since it only was for maximum 3 hours and yeast usually goes dormant in low temperature and reactivates at around 80 – 90 degrees F.

Another theory I’m toying with is that I never stirred the sourdough starter before mixing it with the feeding mix – distributing evenly the yeast. I would always scoop and discard the top part of the risen starter where possibly the highest concentration of yeast population was present.
The leftover (aprox 1 cup) was the bottom portion where there wasn’t such a high yeast population, thus having not enough power to get things growing that soon.

I am VERY curious of your impressions or speculations to see if I did anything wrong.

I didn’t give up hope just yet. Yesterday I started a new batch in the same way as I did on day 1 of the first one, and I will be feeding it the same way, except that now, I have enough supply of bottled water. I will be picking up blogging from where I left it here with the first batch since the process is the same and will be hopefully going on from there.