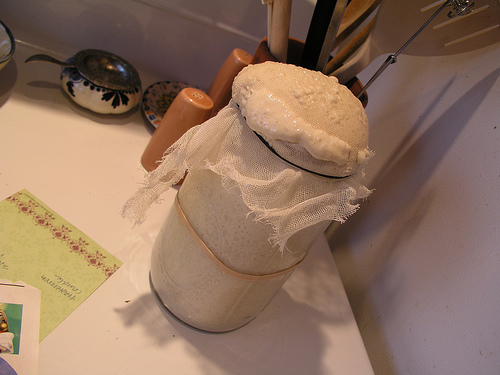 I know. My mysterious disappearance left some of you wondering if the sourdough process got out of control or I got into depression following the ‘depression’ of the previous sourdough starter. I could say both. As Christmas approached, things seemed to be getting more busier and seemed like there was barely any online time.

To be honest, in a way I enjoyed it! Ha! Go figure.

A new batch and a rebirth

Truth is that I didn’t completely discard the previous starter after deflation. After reading Joy of Cooking‘s recipe for sourdough starter, that suggests actually using some commercial yeast to get things started in a kitchen that’s wild yeast depraved, I took 1 cup of the old one, fed it, and sprinkled a half of Tsp of dry yeast.

The next morning, the thing was erupting. Literally. It came to life all of a sudden during the night. It was so promising, that I decided to let it multiply, and in the mean time start a new batch of sourdough starter out of whole wheat flour, that took the same procedure as the previous 3 day process, but this time I left it to hang out there longer between each feeds, considering that yeast activity was seriously slowed down by the somewhat colder temperature on our home. This batch flourished! To the point that I had to twice clean the top of the fridge because of over spilling. Considering this aggressive yeast activity in both jars, I decided it was time to think of the actual bread. Nicole from www.PinchMySalt.com kindly guided me each step through the starter and sourdough bread making quest with great detail. For the first sourdough bread batch I used a 3-day process that consists of creating a sourdough bread sponge, then the dough itself and loaf forming, and ultimately baking.

The “sponge” is nothing else but a starter that has more flour than the starter. I used a “starved” starter in this recipe, and it should have been a “fed” starter instead. Nevertheless, it worked perfectly fine. I used: I mixed these ingredients in a bowl until they formed a ball, then I knead it lightly. Popped it into a covered oiled container, and let it hang out in the kitchen for about 5 hours while its size doubled. Then into the fridge it went for the night. Not what the yeast would call a cozy place, but the slow rise would contribute to the flavor development (fermentation).

A! And a very important thing. Your leftover starter (usually 1 cup in my case) needs to be fed the regular 1 cup flour (all purpose, unbleached) and 3/4 cup bottled water. If it is mature enough (read: grows very fast after each feeding), it can go for a week in the fridge without needing to be fed.