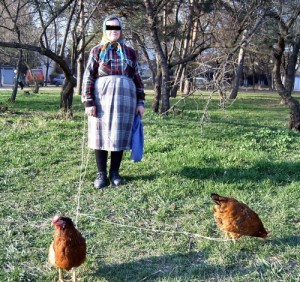 This whole organic food concept cracks me up sometimes. There is a multi-billion industry built on it. The modern American culture became so “fat hydrogenated” that produced a whole anti-movement (rightly so) to bring back the original food production standards of natural cooking.

I grew up 33 years in Romania, an East European country with a struggling economy (and folks I mean in crutches), and rigorous food restrictions. Communism made everyone eat “light” but not as in healthy but as in “less” since food stores were literally empty. We had to go through food ratios, for example one family of four people had access to 4 liters of vegetable (sun flower) oil, 4 kg flour, and 2 kilos of sugar per MONTH. In fact, that’s not bad at all! Talk about eating healthy!

Each city-habitant family was forced in a way to cultivate its own food in their backyard. That meant each little piece of land was transformed into a productive beautiful garden. People there were growing everything from tomatoes, eggplants, onions, potatoes, corn, etc., to apple trees, cherries, grapes, apricots, pears, peaches, and so on. And if by any chance there was something you missed in your garden, it only took an early morning trip (by foot!) to the farmer’s market to find it!
And not only vegetables and fruits, but all families had their little micro-farm in their backyard. Everyone had at least 5-10 chicken that happily were laying fresh eggs each morning, as some of the lucky ones had 2-3 pigs as well!
So, on family could in fact live off their small land! Remember this is talking about living in a city, not in rural areas. And boy, those tomatoes were delicious, those cherries were FULL of flavor, the eggs had plumpy bright orange colored yolks.
The concept of “organic food” was not even known, people just used to eat that way. I miss that.

It is funny for me to go to certain farm museums here. The displays are showing “old” ways of living and farming that I grew up with and are actually practiced in 2/3rd of the rest of the World currently!
We have a nature preserve close to our home in Chicago, where there is a little cute German style settler’s home, garnished with all the original household furniture, wood burning stove, sewing machine, a vegetable garden (all organic of course), fruit trees, chicken, horses, etc., and with little old ladies walking around dressed up in the era’s style, explaining to curious visitors how to shear a sheep, or to make bread, etc.
I go – “Heck! I’ve being doing that for the last 33 years of my life! Am I that old?!?”

As cliche as it sounds, there isn’t anything new under the sun. What’s the big deal? The return to the organic cuisine should not be celebrates as as a novelty but as something that was always there to begin with.
It is a natural refuge to run to from America’s eating disorder.
Fortunately there are movements that are raising awareness on this issues, the most prominent being The Slow Food Movement started as a response to the fast food invasion (read McDonalds) in Italy. They provide key mission objectives to name a few:

In addition, a must read, Michael Pollan’s book The Omnivore’s Dilemma has a fascinating eye-opening insight in how America’s food industry is dictating how we eat, and how choosing what we eat can create serious economic, health, social, environmental and moral issues.

It is interesting for me, and outsider, US Naturalized Romanian to observe these facts. Coming from the deep non-modern world and being catapulted into the heart of the most developed country and culture on Earth, it is striking to see how a whole movement veers back to the very foundation of an organic living, that was in fact there for ages and 2/3rd of the Planet still functions on it.

I guess I should start looking for places where I can find cow or horse manure to fertilize our little backyard garden, and build a hen pen with at least 5 chicken in our well off Chicago North-West suburb home. I bet I’ll be sued by our neighbors.