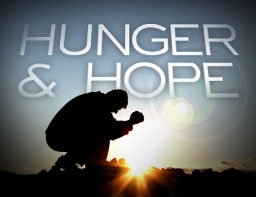 It is still unbelievable that while some fortunate geographical regions lavish in food abundance (me included), other parts of the world still struggle with day to day survival.

World hunger can be easily considered a modern day plague and definitely a dark chapter of our human civilization. There are over 500 million people all over the world living in complete poverty, and something even more dramatic that over 15 million children die of starvation very year!

I believe there is strength in numbers. That’s why I joined Bloggers Unite For Hunger and Hope and Heifer International that put together an event to raise awareness and call an end to world hunger, on April 29, by writing a post on this subject.

A Taste of Hunger

I grew up 33 years in Communist Romania before moving to the USA in 2000, and even if the economical situation back then was bad, it cannot be compared with some of the situations around the world, where a third of the population is starving and one-third is underfed.

There were strict food ratios per family including2 kilos of sugar, 4 liters of sunflower oil, 4 kg flour per month, and the grocery stores were literally empty. So even if I tasted some of that as a child, that was lavish living compared to the current situation in the world.

I feel privileged that I went through those times – because it makes me appreciate things more, specially living here in the USA, the wealthiest country in the world, where food is not a survival matter but a celebration, after all that’s why we foodies write about it. But it is a celebration that has a cloud hanging over it knowing that there are people dying of starvation on other part of the world. And the least we food bloggers can do is to raise awareness and write about it!

Fortunately there are many people and organizations that fight world hunger like Heifer International, that are taking action to the very heart of the situation and provide help and sustainable food to many of the most affected regions and countries.

For instance Heifer International provides agricultural training and livestock to families and communities around the world, that can improve their impoverished situation and give hope. People like you and me can help simply by buying the livestock needed from Heifer’s Online Catalog for survival and sustainability. This way is one of the best way of donating to those in need and consider their human dignity.

Please pass this action on Twitter, write about it in your blogs. We food bloggers might have the best say in taking action to end world hunger. It is NOT an impossible task. The world has more food than it needs. It is just a matter of distribution.