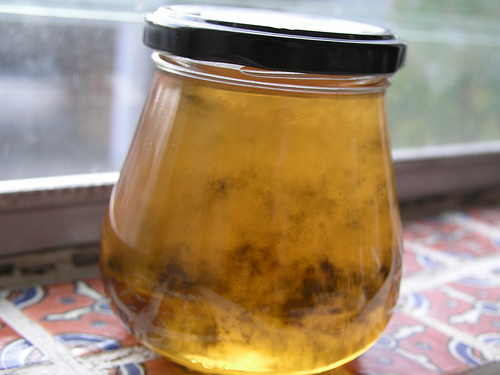 As soon as Chicago winter started showing some mercy in late February with sporadic, slightly above zero temperatures days, Stephanie (my wife) started tapping our only two silver maple trees – on in the front yard the other in the backyard which she actually planted when she was 5!!

It was maple syrup harvest time in the Midwest.

User Serviceable Inside (no tools required)

Even if there are elaborate tools available for tapping maple trees to extract sap (see video below), in truth all you need is a some sort of a tube (plastic) of approximately 1/4″diameter and 6-7″ long, – or if you want to go organic, elderberry twig with the center drilled out.

Then you drill a hole at a slight vertical angle of the same diameter as the exterior of the tube, and insert the tube so you can form a spout where the sap will run into a bucket secured with a string around the tree trunk. Make a little aluminum foil tent above the bucket so it’ll be protected from possible rain or other things falling in.

There were some very productive days and some not. The productive days were the ones when the temperature dropped below freezing during the night but it elevated above during the day to about 40 to 45 degrees. Overall I think she was able to part with a total of 10 gallons or so out of our two maple trees.

The procedure from here is easy. Basically boil the sap down to maple syrup. She would freeze the sap in plastic milk jugs and then just cut them open one by one when she was ready to boil. We didn’t have a big enough pot to do all 10 gallons at once, so we used our 10 quart broth pot.

A Drop In The Bucket – Literally

There is a 40:1 ratio to make maple syrup. In other words it takes 40 gallons of sap to produce 1 gallon of syrup. If you have a forest around you, that’s not a problem, but if you live in Chicago North-West suburbs like we do with only two maple trees in your yard, than you must be happy with only a small jar like the one in the picture. But boy – that’s the real thing!

I wonder what the city will say if I would go an tap every maple tree in our neighborhood? Hmm… Maybe next year!